2015 Day one – Adelaide to Victor Harbour

Today started out ok, we rose at 4.15 am to make the short trip to the Adelaide oval where Channel 7 had setup for the morning cross’s.

When we walked out of our room we looked up and saw stars and the hope that the pending forcast for the day would be wrong was dashed. It had already started to rain !

The atmosphere was one of excitement as we rolled down to the channel 7 cross. There are so many new riders this year and the chatter gave away their nervousness at starting such an epic journey.

When we got to breakfast I headed straight over to get my head onto the 6.30am cross, a sport that I enjoy. I think I can make it a few more crosses before the end of the Tour so keep your eye out in the mornings.

Unfortunately the fun ended pretty quickly when we started riding as it started raining almost as soon as we got on the bike. It wasnt too bad until we got further out of town onto the exposed coastal road and then it turned ugly !!

The wind was blowing across us at 40km/h, the rain was horizontal and the temperature was around 7 degrees but with the wind it felt around zero!

For about two hours we were labouring along at about 15km/h getting buffeted about and getting wet and cold.

Morning tea couldnt come quick enough but there was no respite there either as it was raining pretty hard for that as well !!

The trip up Willunga Hll today was a highlight but not because of its iconic place at the Tour Down Under but because it was the first time for the day that I felt warm !!

I never thought that I would say this but I enjoyed riding up a hill!!

After Willunga there was about 30km to go and about half way through I managed to sneak up the front with Jens  Voigt a famous rider from Germany that has competed in 17 Tour de France races. Not to bad for a beginner !!

Tomorrow we travel to Meningi and the forecast isn’t much better than today. Hope it clears up a bit !! 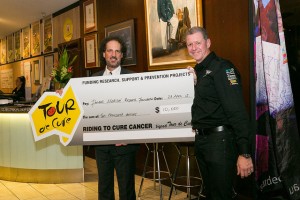