Its getting exciting, there are only today and one other day to go until the end of the Tour de Cure for 2014. There is defiantly a buzz going around the whole group, one that helps to get most people through the day. Today would be no different. Today was the shortest day of this years ride, it was 150km with a few uphills and one awesome downhill but more about that later. The day started out quite unremarkable with us rolling out at a quite normal time of 7.30. There were no Sunrise commitments this morning so that meant that we could leave at a respectable time. Today was to be the “Time Trial” day. We have this once per year and it is to see how quickly you can finish a 15km flat section of road. This years time trial was cut a little short because of some roadwords so basicly we had 8 km of going as hard as we could to find out who was the strongest team. I am with the Life Tech group consisting of riders Owen, Gary, Big G, Louise, Martin and myself. We completed the time trial in around 15.00 mintes. The quickest time was 14 minutes so we were a little outside the pace but we were happy with the result. Directly after the time trial today we rolled around and down to morning tea. As luck would have it we parked in a paddock that had a landing strip in it. It just so happended that there was a crop spraying plane in the area that decided to buzz us as it landed. The channel 7 boys were quickly onto him and talked him into buzzing us for some shots. 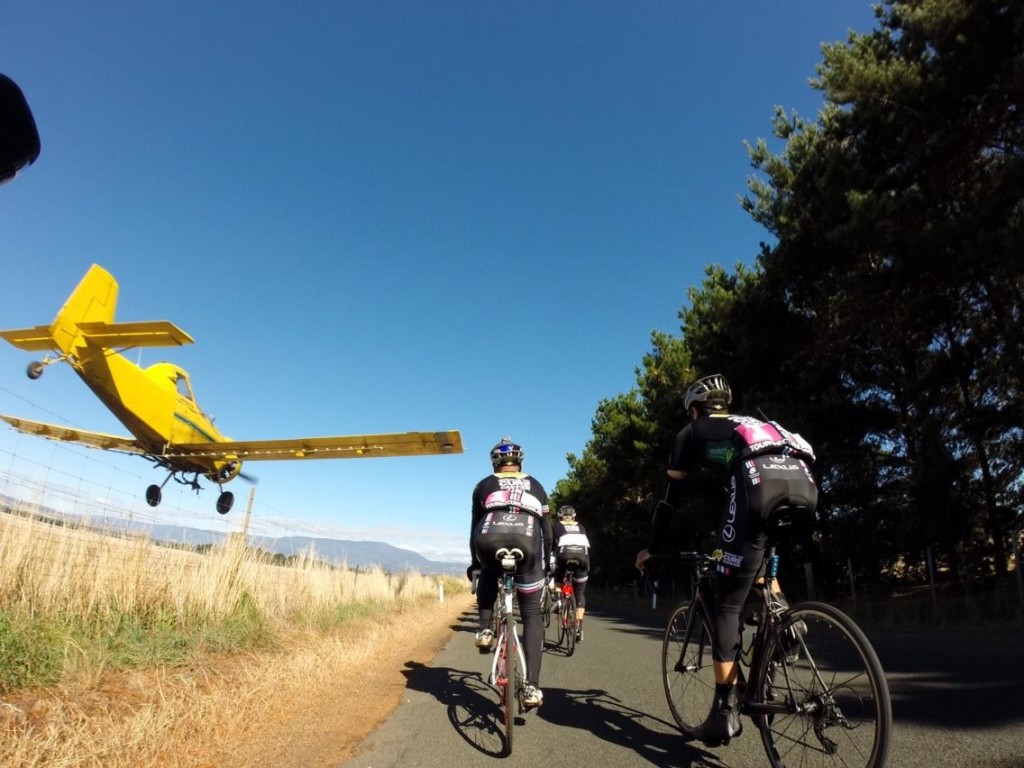 This was a lot of fun and filled in some time till we were off again. Soon we were into the afternoon work with a couple of hills presenting themselves but we made short work of that. We climbed 1500 meters today but it seemed like just another day with some hills. I think that the hills over the last week have hardened me up and I am riding pretty well including the hills !! We had lunch at a wonderful setting on a lake. It was great to sit in the sun and look over the lake and have a relax for a while before setting off again. After lunch the fun begun big time. Right out of lunch is a big decent. The best part for me about climbing a mountain is going down the other side so this was to be a reward for the work that we had done prior to the lunch break. We started off the decent in formation but it soon turned into a boys will be boys type of smash down the mountain. Everytime someone slowed down on the front somebody else would attach off the front and try to get away only to be realed in by the peloton and the whole process would start again. I have never been so quick down a mountain before !! The whole group averaged over 54km per hour for 18km, a wonderful feet !! 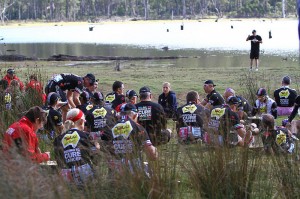 It was great to come in tonight because Kathryn and the kids were there to greet me. It was great to see them after 10 days of being away from them and I got lots of hugs and kisses !! Overall