Its been 6 long weeks since I tried to bend it like Beckham and kick a goal at a soccer coaching clinic and I am yet to get back on the bike to train for this years Tour de Cure.

In the last 6 weeks I have seen 4 different physios, 2 doctors, had an ultrasound and MRI in my quest to start training again for this years Tour de Cure.

The news hasnt been all good.

The first two physios just blindly treated what they thought was a strain of my Hip Flexor but after 4 weeks it wasn’t improving fast enough I decided to get another opinion. The next physio refereed me to a sports Doctor called Dion Lewis who also happens to be the doctor for the Gold Coast Suns Australian Rules football team.

He sent me off to get an MRI as the Ultrasound wasnt very conclusive. The girl that did that didnt know what she was looking at and didnt do it right !

Here is the MRI 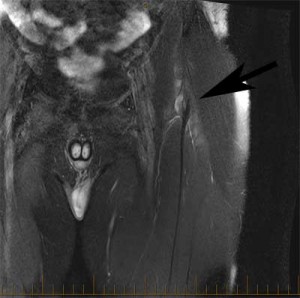 Unfortunately the news wasn’t good. The MRI report showed I had a detached rectus femerous, one of the four muscles in my quad had been separated from the bone!

So off to the sports doctor for me.

I lucked out and got a pretty experienced sports doctor, he had just been appointed as sports doctor to the Gold Coast AFL team so he must have know a little about this injury!

Anyway he wasn’t that pessimistic saying that he didn’t believe the report from the MRI as I still had some strength there.

Will I still be still able to get ready in time?

Only time will tell!