I have just come back from participating in this years Tour de Cure Queensland Country Kids tour. The whole experience of getting out and riding with this small but passionate group of people was fantastic. I will update this page shortly with some photos and video.

Bus day  – Yapoon to Airlie Beach’ In the last couple of tours we have not had a bus day but today we are sitting on the bus doing about 400 km. As I sit here writing this I am looking out at the cane fields and counting myself lucky that we have a day off to rest. I am not sure if it will be of benefit or if …Read more

Biloela – Yapoon – 187km After the last two days everybody was a bit second hand so today was going to be a challenge. To my surprise my body felt pretty good this morning, my legs were ok but my bum was still pretty sore. I was thinking that this day would be a tough one but I surprised myself. We had a fair bit of climbing to do to …Read more

Agnes Waters to Biloela 220km Today is a day that I would rather forget. Today started off well for me with spending time on the front at the start of the day but that was my first rooky mistake. It was pretty flat with some rolling hills and there was some roadworks as well along the way. My morning went pretty well but I must have missed some eating time …Read more

Hervey Bay to Agnes Waters – 262km Today we were up really early to get on the road early. Many of the guest riders had got up especially to see us off which was a welcome sight at 4.00am. Getting an early start though was a good call because we had so far to go. Getting into it early meant that we had 130km before 9,30am so we had knocked …Read more

Rainbow Beach to Hervey Bay 120km The day started with us getting on our bikes and riding down to the meeting point near the beach where we were to have breakfast and do the weekend Sunrise Cross’s with James Tobin.   The atmosphere was a little more subdued today compared to yesterday as the pain of backing up from 140km yesterday was taking its toll on the guest riders. There …Read more

Noosa to Rainbow Beach 140 km Today was the first day of our two day guest riders stage. The excitement in the morning particularly around the new guest riders that had just arrived was unbelievable. The day looked great but there was still the threat of some showers during the day. Because there was 45 new guest riders we were split into 4 peletons and they were sent off in …Read more

Well I have been training for this day for a while and I have been hitting up everybody that I know for a donation for a while now and the day has finally come that I need to walk the walk instead of talking the talk!! Today is the start of Tour de Cure 2012. It was an early start to the day as we needed to make the trek …Read more 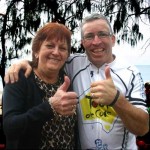 1.45pm on the 8th of March 2012 – Today was a day that I knew was coming but, one of those days that I dreaded. Today was the day we lost a great friend to cancer. Kathy was my business book keeper. Someone that had been around our business almost since we started. Someone that had looked after us not like an employee but someone that cared about what happened to …Read more

I’m officially accepted for the 2012 ride.

Well today I got the official nod for the 2012 Tour de Cure team. That means that in about 4 months time I will be riding 1650km from Brisbane to Mission Beach. Here is the confirmation   CONGRATULATIONS! ……..You’re on the team for the 2012 Signature Tour from Brisbane to Mission Beach.  As we embark on our 6th signature tour, we set our sights on inspiring a region that has …Read more